International Mother Language Day is recognised globally on 21 February each year. In celebration of this day, the University of the South Pacific holds a competition for students across its region to promote understanding of the value of linguistic diversity.

The Niue Campus theme is: Maintaining Vagahau Niue across borders. (Contact the USP campus for details.)

Since Fiji is celebrating 50 years of independence this year, the Fiji campuses are focusing on national unity, inviting school students to write on the following:

(Ages 11-15) “How learning each other’s mother tongues can help us live together happily.”
(Ages 16-19) “English is not the only language that can help promote national unity in Fiji.”

Details for the Fiji school round can be downloaded here:
​

Results of the 2019 competition

This year, we asked senior students to tell us: "What languages will I speak to my children? Why does it matter?" while junior students explained "Things I've learnt by talking to my grandparents about language". Prizes were awarded to the following students:

Download File
For school students outside Fiji, please contact your local USP campus for further details of national rounds: The Tonga Campus is definitely participating, and a final-year linguistics student in Vanuatu is hoping to launch a competition from Emalus.

Meanwhile, Niue celebrated Mother Language Day on 22 Feb with a Vagahau Niue proverb competition for public servants. Entries were received from the Treasury Department, Ridge to Reef Project, and the Niue High Commissioner in Wellington. Entries were rewarded with copies of the Tohi Vagahau Niue monolingual dictionary.

Results of the 2018 competition

We received our highest ever number of entries this year from schools around Fiji. Senior students answered "What is the role of vernacular languages in sustainable development?" while junior students explained "Why my mother tongue is important for my future". Prizes were awarded to the following students: 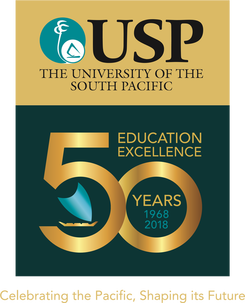 ​In this, our 50th anniversary year, the University of the South Pacific is excited by the progress we’ve made recently with plans to introduce new degree programmes in and about Pacific languages, adding to our current offerings in Fijian and Hindi. The Cook Islands Māori programme launched officially in 2017, and has just completed its first summer school course with a cohort of 26 students. We are now finalising proposals to launch similar programmes in Tongan & Niuafoˈou, Vagahau Niue, and Vanuatu languages later this year. We also hope to see Rotuman on the books for the first time at the Laucala Campus in Fiji, with Saturday ‘taster classes’ coming soon.

We really hope that students leaving high school at the end of 2018 will have the chance to enrol on the first ever degree programme in one of these languages! In the meantime, they will have the chance to tell us their views on the languages spoken in their country, as we prepare to launch the next round of our mother language day essay competition. Check back here very shortly for details ….

Results of the 2017 competition
Once again, we struggled to expand the competition beyond Fiji, although we did manage to increase the number of languages submitted, and we were really pleased to see so many of the prize-winning essays written in languages other than English.

The senior category were asked to write on the topic: “As Pacific Islanders, what can we do to promote the use of our languages?”. Romitesh Chand from Tilak High School submitted the best essay in this category, writing in Hindi, and he was followed by Ipahelen Tekewa Rota from Nakasi High School, writing in English, and Pareti Folau from Vunimono, who wrote in Fijian.

The junior category were asked to write on the topic: "Why I love my mother tongue". First prize went to Jethro Titifanue from Swami Vivekananda College, for an essay written in Rotuman, and he was followed up by two students from Penang Sangam: Raneesha Selvina Chand, writing in English, and Maanvik Yash Goundar, writing in Tamil.

Congratulations to all the schools who took part, and we hope that students at Tilak and Swami Vivekananda are enjoying their year's subscription to Babel magazine, kindly provided by our sponsor. Thanks also to Rajendra Prasad for coordinating the judging and prize giving this year.
Launch of the 2017 competition: Promoting the use of all our languages
The details for the 2017 competition can be downloaded by clicking on the relevant country name below. More countries will be added very shortly ...

​Fiji
Celebrating linguistic diversity in 2017
What reasons do we have to celebrate linguistic diversity in the USP region over the past 12 months? Well, the movie Tanna, shot entirely in the language of Yakel in Vanuatu has been nominated for an Oscar; also in movie news, USP’s Dr Paul Geraghty was a member of the Oceanic Storyboard Trust behind the scenes of Disney’s Moana, helping to get the linguistic side of things as authentic as possible; Samoan has become the first USP region language to be included in Google Translate; USP will soon be launching a suite of new programmes in Cook Islands Māori, making it possible for Cook Islanders to study this language for the first time at tertiary level; meanwhile, at the other end of the education system, work is still progressing well in the implementation of early education in 40+ languages of Vanuatu.
​
All this is good news! But we are still acutely aware that many languages of our region are in danger of falling out of use, and many of us don’t realise how critical the situation is.
​
If you are participating in our essay competition this year, please do take the opportunity to write in your own vernacular. We loved reading all of last year’s entries! 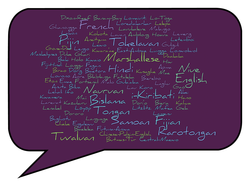 ​The 2016 competition was intended to launch on the day itself – 21 February – and we had hoped to get rounds going in all 12 member countries of the university. However, with Cyclone Winston (the strongest cyclone on record in the southern hemisphere) hitting Fiji that weekend, communication across the region and university was severely disrupted, and things didn’t go to plan. Although USP staff and students in Solomon Islands, Tuvalu and Vanuatu began the process of seeking approval from Ministries of Education to run the competition through schools, communication breakdowns all round proved too much for the first year. In the end, only Kiribati, the Marshall Islands and Fiji were able to take part this year, but we hope to be back bigger and stronger next year! 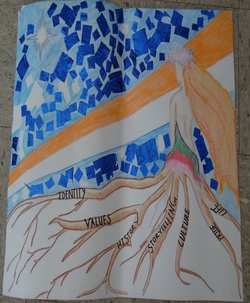 ​Celebrations at the Marshall Islands USP Campus
Led by Gade Maitokana, the Marshall Islands Campus took up the challenge with a full week of activities in celebration of linguistic diversity during the last week of February 2016, followed by a half-day programme on 4 May on which the finalists presented their entries to staff and students. Prizes, kindly donated by the USP-RMI campus, were awarded to the best entrants in categories for each of spoken word, poetry, drama, posters, essays and oratory. A debate on the pros and cons of the use of the mother tongue in education was also held during English classes, culminating in a final between LLP13 and LLP14 students. As the organisers commented in their report, “the celebration not only raised awareness about and appreciation of the importance of the mother tongue and language diversity, but also provided a platform for the students to express their views in a creative and engaging way”. The USP Linguistics team were so excited to read about the activities put on by this campus and look forward to next year’s events!